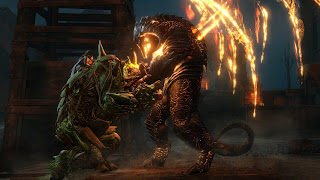 Warner Bros. Interactive Entertainment today released the latest free content update for Middle-earth: Shadow of War.
Online Fight Pits – allowing players to train up their Orc followers by pitting them against Uruks and Ologs from other gamers’ armies around the world. Through this ultimate fight to the death in the arena, players can earn powerful rewards and upgrades that can be used to improve their army and continue the battle for Mordor. The Online Fight Pits free content update is available today for all Middle-earth: Shadow of War owners.

Take a look at the movie.