Everyone knows the history of the evacuation of Dunkirk, if not then Google it to read all about how the ordinary man and woman raised the bar and took to the see in a daring mission, unarmed and under fire, crossed the English channel to rescue the stranded British troops in France with the brave French fighting off the German advance. Now reenact that in the excellent Sudden Strike 4 DLC pack Road To Dunkirk.

We gave Sudden Strike 4 9/10 in our review. After playing more and now playing the add-on I stand buy that score. SS4 grows on you. It's challenging gameplay pushes you to think of how you'd plan things in real life situations. Go it all guns and it will end with all your units in tatters.
The two allied missions have you standing up to the overpowering German advance. You now have 10 new units at your disposal but what steals the show is the navel strike you can now call in. I sat on my sofa as shells whizzed overhead from the strike and pounded the ground and German onslaught.
It's quite thrilling all be it short lived.

The two German missions see you attacking the French and British pushing them back into the ocean. So it really is the Allied missions that stuck out for me. The beach itself is a sight to behold. Little British troops run to the man made jetties to board the little boats as they were called. The bandstand and ferries wheel are all there to see as are small beach tent/huts. Stukas swoop down strafing the troops waiting to board boats or bomb the anti air guns. It's brilliant to see all the extra detail and hard work that has gone into the dlc. 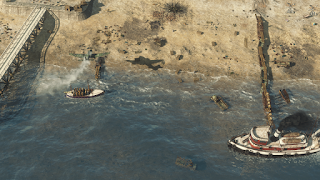 What doesn't sit right with me is the price. On PSN the dlc costs £7.99. This is a shame as yes if your keeping up there are just 4 missions, just shy of £2 per mission. BUT if you put into context the price of the main game can be bought from Shopto in the UK for £27.85 then adding that to the DLC brings a total of £35.84 and trust me that as a package you get a brilliant game worthy of the price. If you don't shop about and pay £49.99 for the game then I'd wait for a sale.

Road to Dunkirk is a great addition to a brilliant game. It's a shame they just missed the boat to run the dlc with the movie that I thought was great but with those memories of the movie, and if you enjoyed the movie, you'll love the Road to Dunkirk dlc pack.