I remember as a teenager an actor that stood out for me and a movie, that movie was Wanted Dead Or Alive staring Rutger Hauer. I was made up to learn that he would be playing the main character in the new horror game from Bloober Team.

You play as Daniel an investigator, receiving a call from his son asking for help which leads him to an apartment block that gets locked down as soon as he has entered, cutting it off from the outside world. The block is full of mad, strange tenants that remain locked behind doors where interacting with them comes through a game of door knocking to try to solve riddles and find out what has happened to your son.

The game soon gets very bloody and anyone with the faintest admiration for jump scare games or who are in any way won over by mad trippy mind bending soul searching are in for a treat. Observer starts off slow but intriguing. You visit your sons apartment to find a 'mess', to search through this to gather clues you have a scanner to view electrical surges or general object scanning. This forms the main part of the game, clue searching.
It's essential that I point out that you have a glove that monitors your health etc. You have a bit of a fit now and then and have to stabilise yourself. I thought the game had gone wrong. Poor frame-rate and messed up visuals is corrected by taking a pill. Ooops.

The game really kicks off when you first use the little prong that can enter a chip in a victim to scan what they have been up to. My first use of this was quite frankly...mad. Brilliant but mad and reminds me of so many movies I've seen over the years, the wtf movies. I can't say any more than that as it would spoil things for you.

Observer is a dirty game. The old run down but futuristic Blade Runner type look to the world is brilliant. Look into a old smashed up toilet and you will repulse at some of the fantastic artwork on show. Lights flicker, rain streams down glass, sparks everything is designed to make you feel uncomfortable, it works. Did I mention blood? Some of the imagination that has gone into the game simply can't be talked about in a review, it would just spoil things.
Sound plays a huge part to the game ramping up the tension. People calling out in desperation wondering whats going on adds to your own claustrophobic feeling.

Can someone call a cleaner! 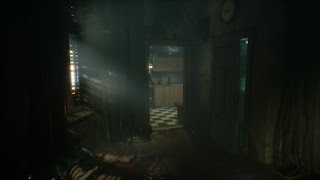 Observer wants to play with your mind and does a really good job of what I feel the developer has set out to do. Games like this come and go but you'll talk about some of it's moments in years to come and that's what makes a great game.

Original and scares at the right turns not just for the sake of it make this game a worthy contender to the walk-horror game genre. Now get in and try to find your son!

It's worth pointing out that some jerks and stutters are part of the game and always make sure your health levels are OK.