Until Dawn Rush Of Blood Review

PlayStation VR is here. With it comes probably one of the biggest, if not the biggest line up of games any launch has seen. So how do you choose what games to get, what will make you feel ill? if any.
I went for VR Worlds and Rush of Blood, an Until Dawn spin off. Now I remember seeing a big Internet games site saying they'd played Until Dawn on PSVR but it wasn't the game you were hoping for. This statement was so far off the mark, in fact Rush of Blood is not only brilliant, it's my first AAA VR game and the game that in fact made me happy about my £349.00 investment. And you know what? It cost £12.00.

I know what your thinking, a £12.00 game justifying a £349.00 purchase? you're mad.
Maybe I am or maybe the developer just nailed that feeling I wanted, that, 'I'm in the game feeling.' 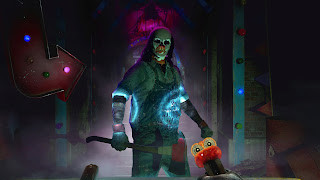 When you boot up the game you're greeted to a slow move down a track up to the title screen. This was the first time I yelled out in VR. My wife sitting behind me startled at my shouts of anguish, ticking me off for my bad language. As you draw up you're greeted by a familiar face. You set-up to use a DS4 or two move controllers. If you don't own Move controllers........Stop. Turn off the game and buy some...........return. Rush of Blood needs to be played with Move controllers. Simple.
Set-up your two motion controllers and stair. This is the first strange sensation you'll have in VR. As you turn your hands your hands on-screen will turn in perfect simulation but instead of controllers you hold guns. Your brain feels controllers but your eyes see guns and this is it folks............virtual reality. It's a surreal feeling and one that will at first confuse. You have that in the game feeling and one that I will remember and talk about for years. 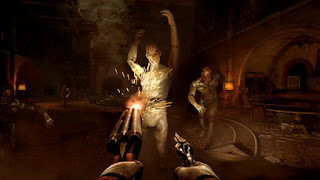 After you get used to being in the game the familiar face of Until Dawn has a chat with you and before you know it you've started on the ride of your life. Up, down and hurtling round tight corners blasting everything in sight, it's just brilliant. You have so much to do and different paths to take on each level. I can't say too much about the game itself as it would spoil some of the things you come across. Fans of Until Dawn will love it but everyone else will enjoy it for what it is. A thrill ride. The ultimate ghost train ride. 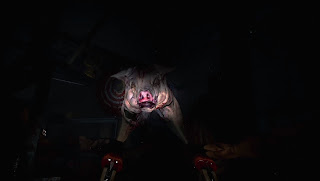 Rush of Blood is a must buy for PSVR. A showcase in fright mixed with high octane shooting thrills and the game that will amaze you if only to see your arms on screen doing things only possible in a game, a virtual reality game.