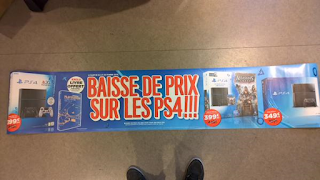 Sony will slash the price of the PS4 from tomorrow according to a leaked pro-mo poster from the Paris Games Week. (picture on Twitter upload) Will we see as much as £50 off the UK price? Sony is dominating retail at the moment with PS2 style sales at the tills. In Europe and Japan the Xb-one is struggling to make any sort of big impact and PS4 taking over 85% of sales in some areas. NPD have just shown that PS4 took September in the sales race in the US, that's now 8 months of 2015 held by Sony. This is a very smart move by Sony to ramp up sales even more. The next few months are vital for Microsoft with exclusive games but even they must see the 13 million or so lead as quite a mountain to climb with PS4 sales showing no sign of slowing down.
Post a Comment
Read more
More posts