A Notice To Developers: Please return to World War 2!

World War 2 is done a young forumer cries. Lets have a modern shooter!

Here we are years later bogged down with shooter after shooter with twitch shooting first person shooters.

No offence but as an older gamer I'm just about sick of them. The new Call of Duty is about as engaging as your morning alarm call. It's time to return to WW2. I'm not talking every game, just mix it up. 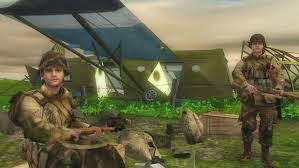 For me, Brothers in Arms Road To Hill 30 and Earned in Blood were two of the best WW2 games ever made. Please consider even a HD remake on Next Gen hardware. Fans are crying out for the next game that was promised and hinted at after Hells Highway. NOT the car crash Furious Four that has been brushed under the carpet but a trip to the Ardennes.

A Normandy beach landing with todays hardware would be fantastic, even a COD 2 rehash would be enough of a boost to distract from all the modern trash.

So please take note developers that follow us, it's not just me, 1000's feel the same!
Call of Duty PS3 News PS4 News Vita News