The Last Of Us Playstation 4 out Friday 13th June? Updated

- June 03, 2014
Update;Tidux of Playstation4 leaks fame has tweeted that the last of us is done and when questioned when it will come out he replied, "June".
So we are sticking with this story until after E3. Have game made a huge misstake or let slip a big secret? 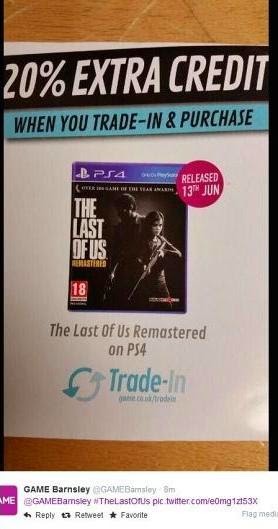 Game tweeted today that the HD re-make was coming to PS4 during E3. They posted a very official trade-in deal form.

They have now climbed down and deleted the said tweets. Now eaither the UK's biggest retailer has got it very wrong, I doubt it, or Sony have wrapped Games knuckles.

We'll see soon enough on the 10th.
PS4 PSN The Last of Us