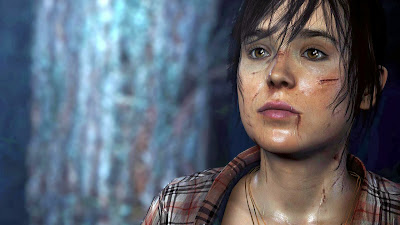 Never before have I found myself after finishing a game with a genuine full body rush from toe to the top of my head, a full body tingle. Never before have I had real tears running down my face. Sure after Ico and Shadow Of The Colosus I was moved and yes, a small tear. But Beyond moved me in only a way that a big sad blockbuster could. ET, The Notebook, you get the picture.


Beyond is the game that every PS3 gamer should play. I was shocked to see some very low scores, yes there have been some high scores but I have to question what sort of people have reviewed and scored the game so low, and quite frankly I worry about them.


Through the play-through you will encounter stages where you will be torn with what you must do or rather what you feel you must do. Some missions will have you performing acts that you never thought you'd do in video game format.


The game is very varied in that you'll never get fed up with playing. Without spoiling anything you'll undertake missions like in Metal Gear Solid 4 to missions where blowing stuff up is a huge thrill, to then walking about playing with dolls. Never before have I felt someones pain so much. The acting throughout the game is second to none and this helps to draw you into the would David Cage has created.


Heavy Rain was brilliant and I really didn't think it was possible to take it higher, he does and then some. In parts of Beyond you could fool friends into thinking you were in fact on a Playstation 4, it looks that good.


I am struggling to review this game as it's so difficult not to spoil any of the plot and to talk any more than I have done would be the wrong thing to do.


I'm a 42 year old gamer so not some snot nosed kid who's taken a break from GTA V or Call of Duty to play and review Beyond, don't get me wrong, fantastic games in there own right but please don't put Beyond in the same category, it's on PS3 but that's where it ends.


Beyond Two Souls is a very special game that both moves and has you sitting on the edge of your seat at times with some very tense moments.


The only thing stopping the game from getting full marks are the fighting portions of the game with missed stick pushes that seem to go the wrong way, leaving you confused as to weather it's you or the game that got it wrong.