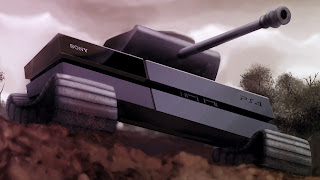 Sony's PlayStation 4 is significantly faster than the Xbox One, according to development sources speaking to Edge.

Despite Microsoft's effort to close the gap as much as possible before release, Edge claims that memory reads on PS4 "are 40-50 per cent quicker than Xbox One", and that the graphics chip's ALU (Arithmetic Logic Unit) is around 50 per cent faster by comparison.

Testimonials from alleged developers also suggest the PS4 has clear advantages.
"One basic example we were given suggested that without optimisation for either console, a platform-agnostic development build can run at around 30FPS in 1920×1080 on PS4, but it'll run at "20-something" FPS in 1600×900 on Xbox One," read the report.

One developer is claimed to have said: "Xbox One is weaker and it's a pain to use its ESRAM".
Microsoft recently announced it has improved the console's CPU from 1.6 GHz to 1.75 GHz - a move which, according to Edge, indicates the Xbox firm is aware of the discrepancy. However, another anonymous development source played down the significance of the change made to the Xbox One's CPU.
"The clock speed update is not significant, it does not change things that much," he said. "Of course, something is better than nothing."

One developer offered a caveat, claiming that Xbox One does have computational advantages in some ways.
"Let's say you are using procedural generation or raytracing via parametric surfaces - that is, using a lot of memory writes and not much texturing or ALU - Xbox One will be likely be faster," said another development source.

But doubts are cast over whether developers can take advantage of these differences. The financial challenges of multiplatform games development means it is unlikely that many games studios will be given the resources to fully exploit the advantages that each console provides.