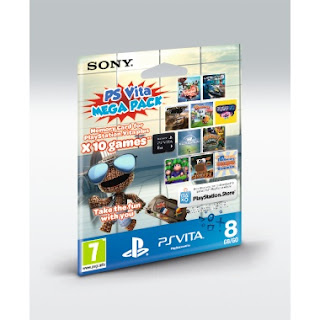 Sony has announced plans to launch a series of PS Vita Mega Packs, a range of bundle packs that include an 8GB PS Vita memory card and a variety of downloadable games.


The first Mega Pack, which goes on sale in the UK later this month, will include the 8GB card and a voucher to download 10 games, including LittleBigPlanet Vita, WipEout 2048 and MotorStorm RC.


A price for the pack has yet to be officially announced, but Smyths currently has it listed for £29.99.


If accurate, the bundle would offer a hefty saving over purchasing each title individually. 8GB PS Vita memory cards typically retail for around £30 alone, with each of the included PS Vita games totalling around £73.


More PS Vita Mega Packs will release throughout the year, Sony says, but if you're holding out for one containing Assassin's Creed: Liberation and Call of Duty: Declassified, don't hold your breath: they each seem to be tailored to a younger audience.


"We know from our research that our younger gamers love playing with their PS Vita; exploring all of the device’s unique features while enjoying rich and deep gaming experiences on the top-quality 5-inch OLED touchscreen," says Sony. "Through these findings, we’ve carefully chosen the games that feature in the PS Vita Mega Packs."


The full line-up of games featured in the first PS Vita Mega Pack include:
Thanks videogamer.com
PSN News Vita News