Indie favourite Thomas Was Alone out this week 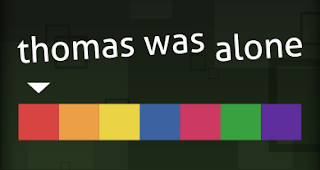 A 20 level DLC expansion pack is also available priced $2.99/£1.99.
Thomas Was Alone is a study in simplicity. A 2D platform-puzzle game that quickly engages and engrosses the player with its charming storyline and art style.
Created by Mike Bithell, with a BAFTA-award winning voice over performance by Danny Wallace and with a rousing score by David Housden, Thomas Was Alone launched for PC and Mac in the summer of 2012 to critical acclaim and has built a strong following for the brand and developer Bithell amongst the indie gamer and development community. In addition to Danny Wallace’s BAFTA award, Thomas Was Alone also received BAFTA nominations for Best Story and Best Music. Following strong sales on Steam, Independent publisher Curve has been working closely with Bithell and SCEE to port and publish the game on PlayStation, in association with Bossa Studios, Bithell’s former employer.
Praise for Thomas Was Alone:

“It proves that you don't need tens of millions of dollars and hundreds of staff to make a game story worth telling, just a good hook, an engaging vision, and a whole lot of heart.”
Destructiod 9 out of 10

“Engaging, funny and fresh, not to mention stuffed to the brim with personality!”
Games Master 8 out of 10

“The understated aesthetic design and unusual co-op puzzles will absorb you for the game's duration – the wit and personality of the writing, though, will stay with you for much longer.”
IGN 8 out of 10
PS3 News PSN News Vita News