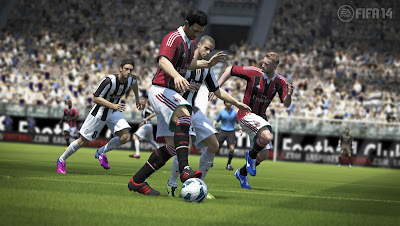 
You can now move freely whilst dribbling with the ball rather than being restricted to a 22.5 degree turning circle.


Players will feel the affect of Momentum


To stop players going too crazy with free movement whilst dribbling, players will be subject to momentum.


The ball won't be stuck to your player's toes. When sprinting at full-pace, the distance of the ball from the player's foot will vary, depending on the heaviness of the touch.


It is now easier to shield the ball whilst dribbling


Players will check there runs and turn defenders


Striking animations are more detailed providing feedback as to why your shot went miles wide.