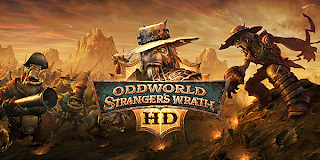 1. Firstly well done for the great job on bring Stranger to the PS3 in HD glory. How was the transition from the last generation to the current format?

SJG: For us the biggest target we set ourselves was to increase poly counts and to have it run at 60fps, which it does 95% of the time. The poly counts were increased massively on all the characters, and on a lot of the environments too, e.g. the main character was ~3000 polys on the Xbox, he’s now ~20,000 in the HD version. Also in levels pipes are now less hexagonal, and more round.

2. I own a 3D TV so the 3D patch was a massive wow for myself, how easy was it to convert the game to 3D and what prompted you to make the move to 3D?

SJG: We wanted to do 3D from day one, but just didn’t have time to get it out in time as originally planned. Adding 3D support was relatively easy and quick, the problem was to balance that so it looked great and didn’t look crazy. We are using OpenGL on the PS3 for the renderer pipeline, the PS3 SDK allows easy implementation of 3D Stereoscopic support into PSGL, which was nice.

3. The game first launched in 2005, you must be proud that you can still turn out the same game years later and it still feel fresh. What is it you think makes this game stand out?

SJG: As a team we’re incredibly proud of what we’ve done with the HD edition, the nice thing is the original Oddworld team did such a FANTASTIC job in the first place with the game that some of that work was done for us. IE parts of the engine were scalable, whereas some weren’t so we did have to do a fair bit of grunt work under the hood to get it running as well as it does.

4. I never got into the Xbox thing so missed out. But on playing the PS3 version I was left smiling and thinking it was so much fun. Was this the main goal behind Strangers?

LL: Gamers smiling and having fun is always a main goal ;-)

5. Onto the PS Vita. What was the main reason to port over to Sony's hand-held? And was it an easier ride porting from the PS3?

SJG: To be honest, Sony asked us if we could do a VITA version. In terms of getting it on there a LOT of the work we did for the PS3 edition helped us get the VITA version done in a relatively short space of time. We had the game almost fully running in Early May this year, what took longer was optimizing it to make sure the FPS was as consistent as possible.

6. Vita is getting some stick from some websites that seem driven in the failure of the Vita. What is your take on this?

SJG: VITA is a strange one, no pun intended… But there haven’t been a lot of titles for it yet, I think we’re around 95 now since launch. So whilst there’s a not a lot of titles and not a massive amount of hardware out there, the attachment rate is pretty high though. Personally I’d like to see better hardware sales for it, but Sony are in a difficult place I think, they need to prove still that the machine is fantastic, especially in these days of smartphones etc.

7. Are there any exclusives to the Vita version?

SJG: Not out of the box, so to speak, but we are adding a little something via an update soon which we hope will fall back into the PS3 version as well.

8. Do you plan any DLC, extra quests etc?

9. In what way did you make use of the Vita's touch screen?

10. What other games do you plan to port to the Vita or indeed to PS3?

SJG: Right now we have no further projects in the pipeline beyond Oddworld: Munch’s Oddysee HD which released on PS3 recently, and on the VITA in February 2013. Beyond that’s it’s Abe all the way for the time being.

11. Have you got any plans for a brand new Oddworld game, maybe PS4?

SJG: We have lots of plans for future projects, as for platform, no idea as of yet, let’s see what’s what during 2013 and 2014 and go from there.

12. I remember reading while playing the very first Oddworld game on PS One, Abe's Oddysee the in-game flatulence was supplied by your very own Lorne Lanning, true? Or false? Funny how you remember some things.

SJG: Haha actually I don’t know about that, I shall ask and find out, if he did do it I’m going to hazard a guess that it was produced orally, rather than… well you get the picture.

13. What is your favourite Vita game, and PS3 game?

SJG: VITA game, until Stranger it was Uncharted ;-) as for PS3, that’s a little tricky currently as I was hoping it was going to be Assassin’s Creed III, but I feel somewhat let down by it, and the changes they made to the controls and the poor acting of the lead character. So for 2012 I think I’ll have to say Journey, such an amazing project, and it deserves everything it’s got this year in terms of awards.