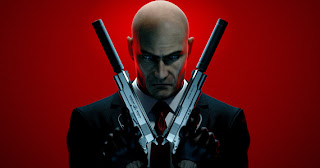 
After I saw Hitman at Eurogamer I was excited it looked stunning and I couldn’t wait to get my hands on the full game.

The first thing that you’ll notice and there’s no way you can miss it is how beautiful the game looks the levels of detail on just about everything are amazing and the lighting effects blur the line between reality and video games whether it’s from sunlight or the police departments flashlights.

Walking around outside in the rain is also pretty spectacular as you watch the rain roll of 47’s bald head and drip onto his jacket.

The game starts with a neat tutorial that’s mixed with an introduction to the story and it teaches you all the basic controls in a fun way that doesn’t leave you feeling bored and wanting to skip it.

The controls work really well, carrying out assassinations is quick and precise and you never find yourself feeling frustrated that you screwed up due to dodgy controls. Movement is also equally precise which is essential when sneaking up on targets to take them down.

There are two main types of missions, the first is my favourite. Assassinate a target and then get out of the area. This might sound a bit boring but it’s really where the game excels.

You could just walk up to the target and gun him down, and then fight your way out first person shooter style taking everyone down but that’s not the point of the game.

The environments are beautifully crafted to give you smarter ways to take down your targets.  There must be at least 5 different ways to take down the first target for example. A sneaky sniper shot from an overlooking window, a drop of poison in his coffee or some explosives placed under his car to name a few.

Then there are the brilliant final destination style deaths for example you can spill some petrol on the floor next to a box of fireworks, then when your target comes along smoking a hot ash causes him to be blown sky high. These chain reaction deaths are really my favourite.
The crowded areas such as marketplaces and night clubs also contain some really well done crowds of people very similar to the crows in Assassins Creed but with some nicer touches such as the way they interact with each other and how you can listen to their phone calls.

The second type of mission involves sneaking your way through environments headed towards some sort of goal.

Here you have to blend in as much as possible to avoid being spotted. If you’re finding that tricky there are always a few things you can do to make it a bit easier.

You can set off distractions in the environment by doing things like messing with computer systems to make equipment start acting up or closing vent valves to fill the area with smoke, reducing the enemies visibility and allowing you to slip past.

Taking out an enemy without being spotted and then switching into their uniform allows you to try and pass yourself off as one of them making moving around much easier.  You can’t stay in the sight of them for too long though as they will realise you’re not one of them and take action.

You can delay being spotted by using ‘instinct’, instinct allows you to use 47’s experience and  training to your advantage with it he can blend in for longer and get closer to enemies without being spotted.

It also allows you to examine your surroundings and pick out important features such as potential spots for setting up accidents or guards and their patrol route.

Each part of the game is split into smallish areas with a series of objectives. This allows one of the most addictive parts of the game work perfectly. At the start of each area you are shown the average score for this area in your home country and the entire world as well your friends scores.

This really motivates you to do well and play the game as the designers intended because you are playing for the pride of your country and don’t want your friends to laugh at you.

Points are earned for completing objectives elegantly and points are lost for pretty much everything else, killing non targets, being spotted and anything non assassin like.

The game isn’t perfect, it can be frustratingly hard at times and you’ll need to play it through on an easier difficulty first to get an idea of the layout of the level and where key items are. Fortunately you can change the difficulty every time you load your save.

Overall this game is a superb experience, trying to figure out the smartest way to take down your target is great fun and the variety of locations and challenges will keep you coming back. Combine that with the fantastic visuals and competitive elements and you have a brilliant game.

PSOnline would like to thank Square Enix for their support.