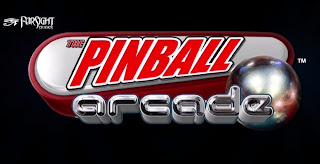 Is it worth picking up this version of the classic game ?

Pinball is and old and well known game, free versions are readily available so is it worth shelling out for this game?

The gameplay mechanics of the game are simple you use the L1 and R1 or Left and Right buttons on the PS Vita to control the flippers and the right analogue sticks to shake the table (but be careful you don’t trip the tilt detector!) On the Vita you can also use the touchscreen to control the game tapping the front screen for the flippers and the back to nudge the table.

The game comes with four tables each with their own challenges and unique layouts.  The “black hole” table is a space themed table with a nice blue colour scheme and a really cool reverse gravity mini table underneath the main one.

“Theatre Magic” is a dramatic magician themed table with fast paced music and lots of flashing lights replicating the feel of being at a magic show.

The next table is called “Arabian Nights” as the name suggests it’s a mysterious Arabian themed table with things like a magic lamp and a genie.

The final table is called "Believe It or Not" a table that brings back memories of Indiana Jones, with a monster at the top of the table, ramps and three passages you can enter in the top left.

The game also appears to be a perfect game for DLC to be released for that adds new tables.

The game is clearly aimed at pinball enthusiasts each table pops up a description of its history when you first choose it and there are tournaments that are based on real pinball tournaments (with prizes!)

Also each tables input method for scoring mirrors the real table as does the display showing your screen and information about what is happening.

This does come at a cost though, the tables appear crowded with a lot of graphics and whilst this may have worked well in real life it can become hard to see where the ball is on the table especially on the Vita.


There are also leaderboards where competitive gamers can compare themselves to the world or just their friends.

For new players the help options for each table are very detailed you can view the goals for each table in the menus and clicking on a goal will take you to the table to explain all the features and what you need to do.

One complaint I have is that the menus seem a bit slow, I’m not always sure if my click has been registered, but normally it’s just the game taking a moment to load the screen.


Overall, if you are a pinball fanatic then this game is a must buy and if not then you will still have plenty of fun with this game and it was nice of the developers to bundle the PS3 and PS Vita  version together rather than making you shell out twice for it.