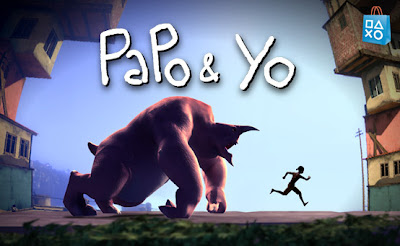 PaPo & Yo is a wonderful but depressing story of a boys imagination as he tries to escape from his abusive and alcoholic farther.


Set in vast, beautiful locations you have to manipulate the world to make progress through the level. You do this by interacting with keys and levers dotted around the maps and highlighted in white. Turning the keys and pulling the levers move the buildings allowing access to previously inaccessible areas, the animations as things move are brilliantly done.

You also need to make ‘monster’ move through some of the levels with you. You do this by tempting him with fruit lying around the levels, he really prefers frogs though but these turn him into a fire monster who mercilessly throws you around. Once he’s in this state only feeding him a blue fruit can calm him down.

Jumping between buildings, platforms and the like is a core part of the game but unfortunately it can be a real pain. Sometimes you can pull off jumps easily the first time but other jumps require you to try over and over and without even changing your technique eventually you will make the jump.

In addition to jumping, turning keys and pulling levers there are puzzles that require you to build path ways by moving boxes around and their positions correspond to positions of buildings in the distance, so you need to move the boxes in a way that builds a path of buildings across a gap.

Your toy robot also assists you from early on in the game allowing you to gain a small rocket powered boost during jumps.

The real stand out point for me in this game was just how big the game is, you look around and see buildings and scenery stretching off far into the distance. At one point you’re high in the air on a transparent floor and my knees were feeling weak as I looked down and saw just how high up I was.

Unfortunately there are some problems with the game graphically, tearing was a real problem in some parts of the game as was slowdown, they don’t make the game unplayable though and hopefully these issues will be fixed in a future update.

At £11.99 this game is more expensive than most short titles on the store it does have some stunning 3D graphics however and the developers need to eat. In fact I’m not sure if it is actually that expensive or we’ve just got too used to £0.99 games on app stores.

Overall, this game may have some rough edges but the story is so wonderfully told and the graphics are so nice, if you can spare £12.00 it’s certainly worth checking this game out.